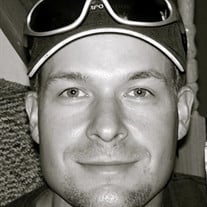 Mineral Point - Brian C. Busch, age 43, of Mineral Point passed away on Thursday, January 6, 2022 responding to an emergency fire call. He was born in Dodgeville on September 4, 1978 the son of Mark and Elaine (Flanagan) Busch. He graduated from Mineral Point High School in 1997. He joined the Mineral Point Fire Department at age 18. After high school, Brian worked for Bruce Geissbuhler Construction, learning many skills and making life-long friends. After building for many years, he then made a very different career choice, and joined Ahlgrimm Explosives as a blaster, where he was employed ever since. He loved working with the whole Ahlgrimm’s crew and they became like a family. He met Laura Rodger and they fell in love. Brian won her heart in many ways, but some of the sweetest were when he’d sneak over and scrape her windshield clean early in the morning so she could drive to school and leave flowers under the windshield wiper blades. They were married in October 2002 and they were looking forward to celebrating their 20th anniversary this fall. Brian was a captain with the Mineral Point Fire Department and taught fire safety each year to the elementary students in Mineral Point. He loved being a firefighter and his fellow firefighters. It was truly like having another whole family. He also enjoyed taking the kids there and showing them around. One of their favorite things was making and eating “special fire house popcorn.” He was a member of the building and grounds committee at Ss. Mary & Paul Catholic Church in Mineral Point, where he and Laura taught CCD together. He enjoyed spending time with his family and watching his children participate in activities they enjoyed. Brian was always helpful, both within our family and across our whole neightborhood and community. He could be counted on to drop everything if someone was in need. Brian’s sense of humor has provided us all with comfort and laughter, and we will miss that terribly. He was a loving, funny, wonderful husband, father, son, brother, uncle, and friend. We are all heartbroken for the times that we won’t share in the future. Brian’s faith and love of family isn’t something that can be taken away by death, and we will continue to draw comfort in that and share it here on Earth. Brian is survived by his wife Laura; his children Jackson, Annabelle, and Eleanor, at home; his parents Mark and Elaine; his brother, Andy of Mineral Point; his sisters Amy of Dane, and Melissa of Madison. He is further survived by his parents-in-law Bill and Mary Rodger of Westfield (or Mayberry as Brian liked to call it); his sisters and brothers-in-law, Karen and Charley Manley; his nephews Will and Tony of Westfield and Jeff and Jenn Rodger; his nephews John and Andy of Westfield; along with many other relatives and friends. Brian was preceeded in death by his grandparents, Helen and Cecil Flanagan, Arnie and Marie Busch, his Aunt Kaye Walsh, a cousin Matthew Busch, and four infant children who were never able to be held in our earthy arms but who are certainly being held by their dad in Heaven now. A Mass of Christian Burial will be held on Friday, January 14, 2022 at 11:00 AM at Ss. MARY & PAUL CATHOLIC CHURCH in Mineral Point. Fr. David Flanagan will officiate. Burial will be in St. Mary's Cemetery. A visitation will be held on Thursday, January 13, 2022 from 2:00 - 7:00 PM and on Friday from 9:00 - 10:30 AM all at church. The family is requesting anyone in attendance to please wear a mask. In lieu of flowers memorials are suggested to the family. The Mass will be live streamed thru the Congregation of St Mary-St Paul Facebook page.

Mineral Point - Brian C. Busch, age 43, of Mineral Point passed away on Thursday, January 6, 2022 responding to an emergency fire call. He was born in Dodgeville on September 4, 1978 the son of Mark and Elaine (Flanagan) Busch. He graduated... View Obituary & Service Information

The family of Brian C. Busch created this Life Tributes page to make it easy to share your memories.