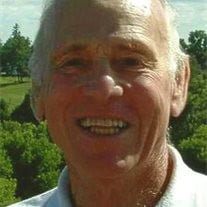 Spring Green/Dodgeville - Bradley M. Glass, former attorney for the City of Dodgeville, passed away on August 6, 2015 at the Crestridge Memory Care Unit. Brad was born on January 17, 1931 in Evanston, IL. He graduated from Princeton University in 1953 where he played football and wrestled all four years. He was an NCAA heavyweight wrestling champion his sophomore year at Princeton and was also an All American defensive guard on the football team. Later, while in the Navy in 1956, he tried out for the Olympic wrestling team. He missed the opportunity to represent the United States in Melbourne by a single match and was the Olympic Alternate for that spot. After graduation, Brad joined the Navy and was a member of the Underwater Demolition Team (U.D.T.) now called the Navy Seals. Brad attended the University of Michigan law School, earning extra money in those years as an assistant wrestling coach for the University of Michigan. Brad married the love of this life, Barbara Becker, in 1953. They raised three fine sons in Northfield, IL as Brad practiced law in Chicago, Northfield and Palatine, IL. Brad was a Representative and then a Senator in the Illinois Legislature for a total of eight years in the 1970s. Brad and Barbara moved to Wisconsin in 1987, where he practiced law with Bob Jackson, in Dodgeville. Brad and Barbara were active environmentalists, restoring and developing prairies on their land between Dodgeville and Spring Green, and participating in the Prairie Enthusiasts. Brad also enjoyed canoeing and canoe racing, camping, cross country skiing and reading. Brad finished ten American Birkenbeiner cross country ski races. Brad served terms as president of the local Habitat for Humanity and Kiwanis, and on the boards of the Wisconsin Riverway and Driftless Area Land Conservancy. Brad is survived by his wife, Barbara, sons Charles (Diane) of San Diego, CA, David of Naples, FL and George (Ester) of Naples, FL, and by six grandchildren, Kyle, Phillip, Kimberly in San Diego, CA, and El King, Princess and Queenie in Naples, FL. He is also survived by his brothers Geoffrey and Walter Jr. Brad was preceded in death by his parents Walter and Mary Glass and his sister, Mary. A Memorial Service will be held at 11:00 a.m. on Saturday, August 15, 2015 at Brad and Barbara's home, 5640 State Road 23, Spring Green, WI. A reception will be held after services. The family suggests that in lieu of flowers, memorials be given to the Driftless Area Land Conservancy, 118 S. Iowa Street, Dodgeville, WI 53588.

Spring Green/Dodgeville - Bradley M. Glass, former attorney for the City of Dodgeville, passed away on August 6, 2015 at the Crestridge Memory Care Unit. Brad was born on January 17, 1931 in Evanston, IL. He graduated from Princeton University... View Obituary & Service Information

The family of Bradley M. Glass created this Life Tributes page to make it easy to share your memories.

Send flowers to the Glass family.