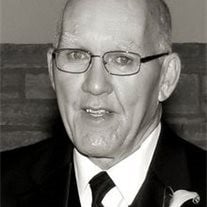 Dodgeville - Bradford D. "Brad" Olson, age 63, of Dodgeville, passed away on Friday, June 1, 2012 at Upland Hills Heath in Dodgeville. Brad was born on May 28, 1949 in Dodgeville, a son of Melvin and Eddis (Berryman) Olson. He graduated from Dodgeville High School in 1967 and attended the University of Wisconsin – Platteville. Brad married Carolyn Ryan on February 14, 1976. She preceded him in death on August 7, 2011. Brad was employed by the Iowa County Sheriff's Department for more than forty years. He started his career in law enforcement in 1969 as a part time dispatcher, promoted to full time patrol deputy in 1971. He worked as the Iowa County Child Support Director from 1987 -1988, returned to the Sheriffs Department and was then promoted to investigator in 1991. Brad remained in that position until January of 2001, at which time he was appointed as Chief Deputy, a position that he remained in until his retirement in 2003. He then worked as a bailiff for the Iowa County court system as an investigator for the District Attorney's office and returned to the Sheriff's Department in 2006 where he worked as an investigator until the time of his death. Brad is survived by his son, Thaddeus (Christina) Olson, of North Mankato, MN; his granddaughter, Faith; his mother, Eddis Olson, of Dodgeville; his brother Brian (Sally) Olson, of Middleton; many nieces, nephews other relatives and friends. He is preceded in death by his wife Carolyn; his father Melvin and his cherished German Shepherd, Buzz. Funeral Services will be held at 3:00 p.m. on Sunday, June 10, 2012 at the GORGEN-McGINLEY & AYERS FUNERAL HOME in Dodgeville. Pastor Bruce Bennett will officiate. Burial will be held in Eastside Cemetery. Friends may call from 12:00 p.m. until the time of service on Sunday at the funeral home. Brad will be greatly missed by his family, many friends and the numerous crime victims that he diligently worked for during his career.

Dodgeville - Bradford D. "Brad" Olson, age 63, of Dodgeville, passed away on Friday, June 1, 2012 at Upland Hills Heath in Dodgeville. Brad was born on May 28, 1949 in Dodgeville, a son of Melvin and Eddis (Berryman) Olson. He graduated from... View Obituary & Service Information

The family of Bradford D. "Brad" Olson created this Life Tributes page to make it easy to share your memories.