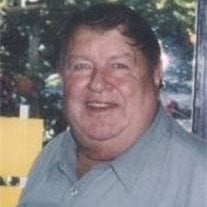 Highland – Bill F. Holman, age 78, of Highland, passed away on Monday, January 7, 2013 at St. Mary's Hospital in Madison. He was born on February 2, 1934 near Cobb, Wisconsin, a son of the late Will and Rosella (Haines) Holman. He graduated from Dodgeville High School. On October 5, 1957, he married Dorothy Hugill in Madison. Bill was involved in farming. He also started Hawkeye Realty, which he owned and operated for over 35 years. Bill enjoyed all sports, especially football, basketball and golf. Animals were always a part of Bill's life – farm animals, race horses and the many cats he and Dorothy raised. Bill loved spending time with his two grandchildren, first introducing them to McDonalds and later to the casinos. He was affectionately called "Grampy" by his granddaughter, Steffie. Bill was always up for a party with his many friends and relatives. Bill is survived by his wife of 55 years, Dorothy Holman; his son, Jerry (Janice), of Union, Missouri; his grandchildren, Stephanie James and Chris James; his niece, Pat (Bob) Peterson; his brother-in-law, Richard (JoAnn) Hugill; many nieces, nephews, other relatives and friends. He was preceded in death by his parents and his sister, Dolly Kent, his brother, Chalmer. Funeral services will be held at 1:00 p.m. on Monday, January 14, 2013 at the GORGEN-McGINLEY & AYERS FUNERAL HOME in Dodgeville. Dr. Mark P. Bishop will officiate. Burial will be held in Calvary Cemetery in Cobb. Friends may call from 11:00 a.m. until time of services on Monday at the funeral home. The family suggests that memorials be made to the Iowa County Humane Society, 305 County Road YZ, Dodgeville, WI 53533.

The family of Bill F. Holman created this Life Tributes page to make it easy to share your memories.

Send flowers to the Holman family.