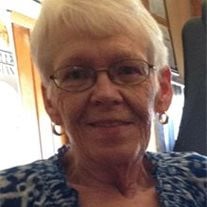 Ridgeway – Beverly J. Wilkinson, age 69, of Ridgeway, died on Tuesday, January 13, 2015 at St. Mary's Hospital in Madison after a brief illness. She was born on April 29, 1945 in St. Louis, Missouri, a daughter of Walter and Vera (Holt) Olson. She graduated from West Allis Central High School in 1963. On June 4, 1966, Beverly married Robert Wilkinson at the Arena Congregational UCC. Beverly worked at Springs Window Fashions in Middleton and then Lands' End for many years until her retirement in 2013. She was a member of the Ridgeway American Legion Auxiliary. She loved her morning coffee group at Porky's Pub, spending time with her grandchildren, her dog "Zip", fishing on the Wisconsin River and their annual fishing trip to Island View Resort in Deer River, Minnesota, where they went for the last 23 years. Beverly is survived by her husband, Bob; her daughters, Laura (special friend, Kevin Rideout) Hutto, of Janesville, June (Jeff) Taylor, of Sun Prairie, Kay (Steven) Sieling, of Dodgeville; her grandchildren, Draven, Lynndie, Kristina, Nichole, Carter, Nikki, Nate, Amanda, Lee and Fallon; her brother, Ole (Barb) Olson, of Sullivan; other relatives and friends. She was preceded in death by her parents, her father and mother-in-law, Earl and Opal Wilkinson and her brother-in-law, Delbert Wilkinson. Visitation will be held from 4:00 p.m. until 7:00 p.m. on Friday, January 16, 2015 at the GORGEN-McGINLEY & AYERS FUNERAL HOME in Dodgeville.

The family of Beverly J. Wilkinson created this Life Tributes page to make it easy to share your memories.

Send flowers to the Wilkinson family.