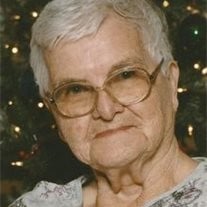 Dodgeville &#8211; Berniece Ellen Aurit, age 89, of Dodgeville, died with dignity on Thursday, November 14, 2013. Mom entered this world on March 9, 1924, one of three daughters born that day to William and Margaret Eustice of Rewey. She married... View Obituary & Service Information

The family of Berniece E. Aurit created this Life Tributes page to make it easy to share your memories.

Send flowers to the Aurit family.