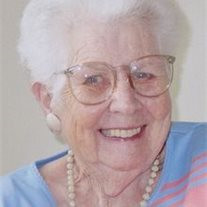 Mineral Point - Avis M. Fralick, age 93, of Mineral Point passed away peacefully on Monday, September 7, 2015 at Upland Hills Nursing & Rehabilitation Center in Dodgeville. She was born on November 19, 1921 the daughter of John and Anna Johnson. Avis taught school for a short time before marrying Willard Fralick, together they raised their family in Milwaukee. She was an accomplished seamstress. There wasn't anything she couldn't make. Throughout the years she amassed an enormous collection of elephants. She was devoted to her entire family and will be missed dearly. Avis is survived by her daughter, Linda (Donn Hanson) of Mineral Point, five grandchildren, Marc Kivisto, April Smart, Mary (Tom) Clausen, Beth (Kevin) Plummer, and Cory (Tara) Horsfall; 7 great-grandchildren Garrett, Dylan, Ella, Traa, Haali, Mckenzie, and Brody, Avis is further survived by step-grandchildren, and several nieces and nephews and her special caregiver Angie Walrack. She is preceded in death by her parents, her husband Willard, daughter Gail Kivisto, son Gary Fralick, her sisters, Dora (Dick) Theide, Ella (Mel) Calkins, and a brother Erv (Tora) Johnson, and sister-in-laws and brother-in-laws. Funeral services will be held on Thursday, September 10, 2015 at 7:00 p.m. at the GORGEN FUNERAL HOME in Mineral Point. Pastor Rich McLeer will officiate. Burial will be held in Wisconsin Memorial Park in Milwaukee. A visitation will be held on Thursday from 4:00 until 7:00 p.m. at the GORGEN FUNERAL HOME. In Lieu of flowers please make memorials to the Hope Lutheran Church or Upland Hills Nursing & Rehab. A special thank you to Upland Hills Nursing & Rehab for the wonderful care.

The family of Avis M. Fralick created this Life Tributes page to make it easy to share your memories.

Send flowers to the Fralick family.