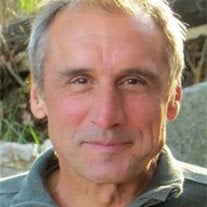 Dodgeville – Anthony J. "Tony" Miess, age 56, of Dodgeville, passed away on Thursday, April 17, 2014 at his home surrounded by family. Tony was born on May 24, 1957 at St. Joseph's Hospital in Dodgeville, a son of Robert and Betty (Miller) Miess. He graduated from Dodgeville High School in 1976, where he was part of the wrestling team and continued to follow his nephews' high school wrestling careers. Tony was always quite the handyman, and worked as a carpenter before he began farming in March of 1982. He continued with this talent by building his family's home with the help of friends and family. He was able to fix just about anything with little more than a hammer and his imagination. He loved the farming community, being outdoors, building wood projects for his daughters, sampling craft beers, and throwing horseshoes in his Wednesday night league. One of Tony's favorite things to do was simply spending time at home with his family and the family dog, Cloe. He was an avid Packer and Badger fan and although soft spoken, he had a quick wit and infectious laugh and smile. On February 15, 1986, Tony married Laurie Scullion at St. Anthony's Catholic Church in Highland. After 28 years of marriage, they continued to enjoy taking weekend road trips, going to different restaurants, outings with friends, and going for four-wheeler rides to enjoy the scenery of their farm. Tony is survived by his wife, Laurie; his daughters, Ashley (Andy Schnurer), Jessica (Travis McDonald) and Amanda; his parents, Robert and Betty Miess; his brother and sisters, Dan (Lynette) Miess, Susan (David Leonard) Miess, Lynn (Dan) Meuer, Ellen (Mike) Michek, all of Dodgeville, Sara (Todd) Hogan, of Spring Green; many nieces, nephews, relatives, and many friends. A Mass of Christian Burial will be celebrated at 11:00 a.m. on Tuesday, April 22, 2014 at ST. JOSEPH'S CATHOLIC CHURCH in Dodgeville. Burial will be held in St. Joseph's Cemetery. Friends may call from 4:00 p.m. until 8:00 p.m. on Monday at the GORGEN-McGINLEY & AYERS FUNERAL HOME in Dodgeville. In lieu of flowers, the family asks that memorials be made to Upland Hills Hospice.

The family of Anthony J. "Tony" Miess created this Life Tributes page to make it easy to share your memories.