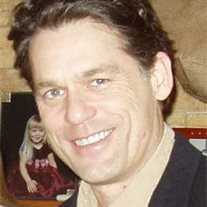 Spring Green, WI - Anthony "Tony" Mason, age 55, of Spring Green, died unexpectedly on October 12, 2014. Tony was born on June 6,1959 to Vern and Rheta Mason. He grew up in Grand Forks, ND. He attended Red River High School where he took part in the theater and hockey. He graduated in 1976 then attended the University of North Dakota. Tony built his own contracting business before he started working for PDQ in Boulder, Colorado in 1992. He moved to Bel Air, California with the love of his life, Lora Goehring, four years later. There, Tony proudly orchestrated one of the most challenging building projects of his life. Tony married Lora in 1997. In 1998, the couple (then living in Colorado) welcomed their first daughter, Xanthe. In 1999, the family moved to Wyoming Valley, Wisconsin where Tony became General Manager of Rush Creek Sportsmen's Club. In January of 2002, their second daughter, Nina, was born. Tony was a devoted husband, father and friend who loved his wife and daughters beyond measure. He was passionate about many things, including building houses, learning, music, poetry, theater, movies, travel, outdoor sports and animals. He had a wonderful sense of humor. All who knew Tony respected and admired him. He is survived by his wife, daughters, parents, brother Greg (Diane), sister Laura Demerais, nieces, nephews, other relatives, and friends. Private family services were held.

The family of Anthony "Tony" Mason created this Life Tributes page to make it easy to share your memories.

Send flowers to the Mason family.