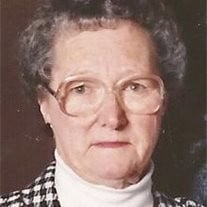 MINERAL POINT - Anna Mae Steffes, age 89, of Mineral Point, passed away Saturday, March 17, 2012, at Bloomfield Manor in Dodgeville. Anna Mae was born in Dodgeville, on July 2, 1922, the daughter of Frank and Elizabeth (Dalles) Ruppert. She was united in marriage to Gilbert Steffes on Feb. 19, 1955, at St. Joseph's Catholic Church in Dodgeville. They farmed together in Waldwick for 13 years, moving to their farm in Mineral Point in 1969, where she enjoyed many years of gardening, cooking, and spending time with her family. Anna Mae is survived by her husband, Gilbert; children, David of Dodgeville, Glen (Stephanie) of Janesville, Marjorie (Bucky Rux) of Mineral Point, and James (Jean) of Mineral Point; six grandchildren; four great-grandchildren; a sister, Catherine (Donovan) Kopp of Waunakee; and two brothers, John and Ernest (Delores) Ruppert of Dodgeville. She was preceded in death by her parents; infant twin sister, Elizabeth; and infant son, William. A Memorial Mass of Christian Burial will be held at 6 p.m. at Ss. MARY'S & PAUL'S CATHOLIC CHURCH on Tuesday, March 20, 2012, with Father James Hinnen officiating. Visitation will be held from 4 p.m. until 6 p.m. on Tuesday, March 20, 2012, at the church. Burial will be in St. Mary's Cemetery. In lieu of flowers, memorials many be made to the Hodan Center in Mineral Point and the Mineral Point Rescue Squad.

The family of Anna Mae Steffes created this Life Tributes page to make it easy to share your memories.