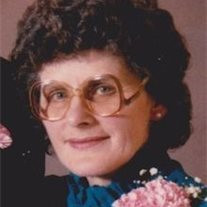 Mineral Point - Myrtle Rosanna Loken of Mineral Point, who many knew as "Ann," was reunited with her son Mark on his 51st birthday on Saturday, November 15, 2014. Ann was born on March 21, 1935, to Grace (Taft) and Loren Burton in Haney Township... View Obituary & Service Information

The family of Ann Loken created this Life Tributes page to make it easy to share your memories.

Send flowers to the Loken family.