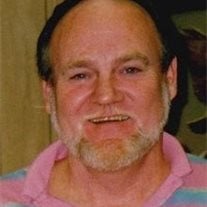 Mineral Point / McConnell, IL - Allen E. Trost, age 67, of Mineral Point and formerly of McConnell, IL passed away on Wednesday, September 26, 2012 at St Mary's Hospital in Madison. Allen was born to Clarence "Coonie" Trost and Mary (Schueller) Edler Trost on April 11, 1945. He graduated from Lean-Winslow High School in 1963. He married Sandy Breed in Nora, IL. He worked at Burgess Battery of Freeport, Janlin Plastic of Warren, Heini's Plastic, Freeport and S&K Plastics of Monroe, where he retired in 2010. Allen lived in the McConnell / Warren area most of his life. He was a Volunteer Fireman for McConnell / Warren, IL for many years. After retirement, Allen and his fiancé, Barb Zimmerman, moved to Mineral Point, WI. Allen loved snowmobiling, race cars and most of all, tinkering in his garage with his classic cars. He also did stockcar racing with his son, Scott Trost. Family and friends meant everything to Big Al - named that as much for his big heart as his size. He always was ready to lend a helping hand. His greatest pride and joy was time spent with his grandkids. Not only was he grandpa to his son's two girls, but was grandpa and dad to his extended family. Allen is survived by his fiance, Barb Zimmerman of Mineral Point; his son, Scott (Tina) Trost of Livingston; his granddaughters, Chelsey and Andrea Trost; his sister, Gloria (Gary) Lizer of Lena, IL; and Barb's extended family, and many nieces, nephews, relatives, and friends. He was preceded in death by his parents, and his former wife Sandy. A Celebration of Life will be held on Sunday, September 30, 2012 from 2:00 until 5:00 p.m. at LEAMON'S FUNERAL HOME, 210 W. Main St., Lena, IL. Funeral Services will be held on Monday, October 1, 2012 at 11:00 a.m. at the GORGEN FUNERAL HOME in Mineral Point, with a visitation from 9:00 a.m. until time of service at the GORGEN FUNERAL HOME. Burial will be held in the Linden Cemetery. A luncheon will follow burial at the Linden Methodist Church

The family of Allen E. Trost created this Life Tributes page to make it easy to share your memories.

Send flowers to the Trost family.