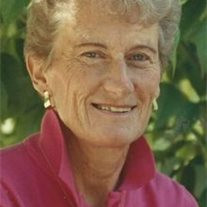 Dodgeville - Alice M. Terrill, age 78, of Dodgeville, met her savior on Thursday, September 5, 2013, due to injuries sustained in a motor vehicle accident on August 29, 2013. Alice was born on January 22, 1935 to Matthew and Myrtle (Crook) Brennan. She grew up on a farm on Brennan Road, where she still lived up until the time of her death. She graduated from Dodgeville High School in 1953. On February 15, 1958, Alice married Lowell "Duzie" Terrill, her soul mate and love of her life. Together, they had four loving daughters, 9 grandchildren and one great grandchild. Alice enjoyed working at Lands' End for 35+ years and made many special friendships. She had many passions in life, including playing golf, cards, walking, bridge and especially spending time with her grandkids. Grandma had a bond with all her grandkids that could never be broken. Alice was an avid golfer. She was Woman's Club Champion in 1980 and in the Hall of Fame at Dodge-Point Country Club. Alice was also a devoted Catholic and was an integral part of St. Joseph's Catholic Church for over 50 years. She took communion to the sick and led many rosaries for visitations. Alice and Duzie spent many days golfing and nights playing bridge. She was very fortunate to have so many wonderful friends in her life and wouldn't mind a road trip to the casino on occasion. She was also a member of the Red Hat Club, where she enjoyed friendships and laughter. Alice Marie is survived by her loving husband of 55 years, Lowell "Duzie"; her daughters, Marsha Furry, of Mazomanie, Pam (Chatter) Chapman, of Dodgeville, Patti (Brad) Haas, of Spring Green, Lori (Craig) Thomas, of Sparta; nine grandchildren, Callie and Tanner Furry, Krystle (Jake) McCutchin and Shane Chapman, Jessica (Kyle) and Justin Haas, Brent, Brock and Brittany Thomas; great granddaughter, Alexa McCutchin; two brothers, Henry and Ray (Delores) Brennan, both of Dodgeville; three sisters, twins Margaret Karls, of Lodi and Mary (Joe) Esch, of Dodgeville and Carol Ann Deans, of Dane; her sister-in-law, Mary Ellen Brennan, of Evansville; her sister-in-law, Mabel Jane (Gib) Gribble, of Mineral Point; her brother-in-law, Tom (Sandy) Terrill, of Verona. She was preceded in death by her parents, Matt and Myrtle Brennan, her mother and father-in-law, Lynn and Velma Terrill, three brothers, John, Francis and Bob Brennan, her sister Betty Wunnicke, her brothers-in-law, Bud Karls, Gene Deans and Tucker Wunnicke, her sisters-in-law, Sharon Terrill, Mary Brennan, Elizabeth Brennan and Helen Ryan Brennan. A Mass of Christian Burial will be celebrated at 11:00 a.m. on Tuesday, September 10, 2013 at ST. JOSEPH'S CATHOLIC CHURCH in Dodgeville. Father Patrick Wendler will officiate. Burial will be held in St. Joseph's Cemetery. Friends may call from 4:00 p.m. until 8:00 p.m. on Monday at the GORGEN-McGINLEY & AYERS FUNERAL HOME in Dodgeville, where a rosary service will be said at 8:00 p.m. Friends may also call from 10:00 a.m. until time of Mass on Tuesday at the church. In lieu of flowers, memorials may be made to St. Joseph's Church. She will be missed dearly by all.

Dodgeville - Alice M. Terrill, age 78, of Dodgeville, met her savior on Thursday, September 5, 2013, due to injuries sustained in a motor vehicle accident on August 29, 2013. Alice was born on January 22, 1935 to Matthew and Myrtle (Crook)... View Obituary & Service Information

The family of Alice M. Terrill created this Life Tributes page to make it easy to share your memories.

Send flowers to the Terrill family.