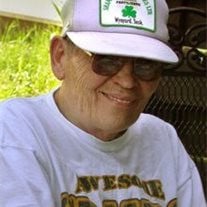 Mineral Point - Albert J. Gleichauf, age 80, of Mineral Point, passed away on Tuesday, August 7, 2012 at the Mineral Point Care Center. Albert was born on October 1, 1932, the son of Leo and Leona Gleichauf. He graduated from Mineral Point High School in 1950. After graduation, from high school Albert was a dedicated member of the National Guard, serving from 1950 to 1962. He was a Staff Sergeant in the Combat Specialist Group with the 128th Infantry. On December 20, 1954, he married the woman who would borrow the money out of his boots to go shopping, Elizabeth (Betty) Wagner in St. Mary's Catholic Church. He was a member of the St. Mary's Catholic Church. Albert worked at Nelson Muffler until his retirement in 1994 after 31 years of service. Albert enjoyed spending time with his family, being outdoors, fishing, gardening and camping at Lake Joy during his years of retirement. Albert is survived by his wife of 58 years, Betty; his son, Tony (Patti Palmer) Gleichauf of Dubuque; his daughter, Tara Gleichauf, of Racine; his granddaughter, Brittany (Bobby Lee) Gleichauf, of Mineral Point. He is further survived by his sister, Pauline (Gordon) Clayton, his sister-in-law, Fern Gleichauf of Janesville, his brother-in-law, Jerry (Sandra) Wagner and numerous nieces and nephews. He was preceded in death by his parents, his sister, Helen Thomas, his brothers, Robert Gleichauf and Francis Gleichauf, his sister-in-law, Shirley Gleichauf and his brother-in-law Roger Thomas. A Mass of Christian Burial will be celebrated at 11:00 a.m. on Saturday, August 11, 2012 at Ss. MARY & PAUL CATHOLIC CHURCH in Mineral Point. Fr. Monte Robinson will officiate. Burial will be held in St. Mary's Cemetery with Military Graveside Rites accorded by the Mineral Point VFW and American Legion. Friends may call from 9:00 a.m. until time of Mass on Saturday at the church. Albert was a good husband, father, grandfather and friend to many. He will be missed.

The family of Albert J. Gleichauf created this Life Tributes page to make it easy to share your memories.